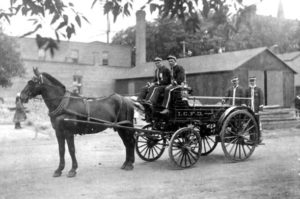 Iowa City is celebrating the 150th anniversary of its fire department with events throughout the summer.

Lieutenant John Crane says there were some volunteers who fought fires way back in 1842. Things then started becoming more organized when the State Capitol was moved to Iowa City and the Old Capitol building was under construction.

“And they figured they’d have some need some hose and some other equipment to kind of protect that. And then kind of for next 30 years, there were kind of some — I don’t want to call them ragtag — but some volunteer companies that kind of formed to provide some fire protection throughout the city of Iowa City,” Crane says.

As the city continued to grow, the need for more permanent fire protection became evident. “In March of 1872 there was a big fire downtown and destroyed the Clinton House Hotel. And there’s a lot of development in Iowa City at that time, a lot happening downtown,” he says. “They finally thought they had enough of fires destroying property in downtown Iowa City, so they, the city kind of decided they needed a fire department. So by city ordinance on May 20, 1872, they established what was called the Iowa City Fire Department.”

The city provided 500 dollars of gear to a fire protection company made up of a group of volunteer firefighters. The fire company had to report back to the city on its activities. The volunteers provided fire protection until 1912 when three paid firefighters were hired — including a chief. That year also saw the department buy two white fire horses from a farm in Keota named Snowball and Highball — which became a big interest in the community.

“They weren’t the first horses in the Iowa City Fire Department, because there were some other horses before them,” he says, “but they were the first white pair of white horses. So, they became pretty photogenic and they also came around the time where photography came about. So a lot of pictures were taken of a Snowball and Highball.”

The two white horses were originally housed at the Alert Hose Company station on the same block where the Hamburg Inn is now on North Main Street. Crane says the department also bought its first motorized fire truck in 1912. Crane isn’t sure how many calls firefighters got back then — but he does know things have picked up dramatically in the last 50 years.

“We do know at the 100th-anniversary celebration in 1972, the fire department ran less than 1,000 calls for emergency calls for service. In 2021, ran over eight-thousand, and I think we’re on pace now to run over nine-thousand.,” according to Crane. “So the call volume has increased dramatically. And that’s because we’ve become sort of an all hazards department, a lot of fire departments have, or what we call all hazard departments, which means you go on EMS calls, emergency medical calls, fire calls,”

He says the number of staff hasn’t increased quite as much as the calls. They had 52 people in the department at the 100-year celebration in 1972, and now have 64 people. One other thing that has changed is the Clinton House which burned down in 1872 was only three stories.

With the University of Iowa in Iowa City, there are buildings that are 20 stories. “The one thing about those buildings where they do have really advanced fire protection systems, you know, early warning systems and sprinkler systems. So the chances of something I guess the chances of a big event happening are lower,” he says. “But if something does happen to where it requires a fire response, it’s a challenge, a challenge to have enough personnel on scene and the right equipment on the scene to handle that, getting all the equipment up to those top floors.”

They will be celebrating the anniversary with open houses at the four fire stations throughout the coming weeks. They also have a display of historical pictures and items from the fire department at the Iowa City Public Library