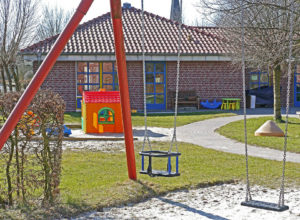 Child care is an urgent need in southeast Iowa’s Lee County, where the county health department is gauging the depth of the problem by conducting a survey though a five-year grant from Prevent Child Abuse Iowa.

Breanna Kramer-Riesburg, the department’s outreach coordinator, says one trouble area identified in the first year of the survey was the need for more access to child care.

“Child care is really hard to find, especially for infant care,” Kramer-Riesburg says, “and when we looked at the data, that was reflected back.” Over time, many of the county’s in-home child care providers turned into child care centers, and there are far fewer of those centers now.

There are roughly two children age five or younger for every childcare opening countywide, and the communities of Fort Madison and Montrose are both considered “child care deserts.” “That’s causing a lot of troubles when we’re looking at workforce stability and parents able to get jobs that they want,” she says, “especially when they’re looking at a year-long waitlist to get into child care.”

Kramer-Riesburg says she’s heard from a number of couples whose first call when they find out they’re pregnant is to see if they’ll be able to find a child care slot. There are also no licensed providers in Lee County that provide evening or overnight child care. That’s another problem in a market that is heavy on manufacturing and industry jobs, and has many parents working second or third shift. Kramer-Riesburg says the root of the crisis is a workforce issue.

“It’s all in the staffing,” Kramer-Riesburg says. “A lot of our child care centers are licensed to provide care to more children than what they’re able to because they just don’t have the staff to provide quality care for that many kids.”

Child care workers need to have a specific set of skills and passion, but most only make nine or ten dollars an hour. That’s lower than wages for most jobs in the county. Providers can’t increase wages without pushing that cost on to families, many of which already are struggling with the cost of childcare. Kramer-Riesburg says providers need grants or other investments to pay a livable wage, attract more workers, and serve more families.

The health department is conducting surveys of employers, families, and childcare providers to get a clearer picture of the problem. Those surveys are accessible on the Empowering Families in Lee County Facebook page.