You are here: Home / Agriculture / Iowa and New York face off in best burger competition 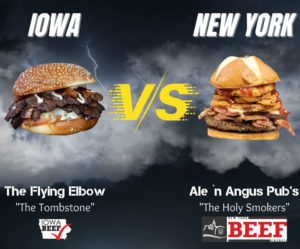 Beef producers in Iowa and New York are in the midst of a burger battle. Kylie Peterson, spokeswoman for the Iowa Beef Industry Council, says carnivores in both states are being encouraged to log on and cast a ballot for their favorite burger.

Peterson says, “This is just a fun way to put together two states that have a similar goal and that is to promote beef.” Over the past few months, Iowans got the chance to vote on their favorite burgers, as did New Yorkers. The winners of the respective state contests are now going head-to-head, or bun-to-bun.

“We’re putting the two together in a little mini contest that’s for bragging rights only,” Peterson says. “There’s no prize or anything like that. It’s just a fun way to capitalize on our contests that we’ve already had.” The contest ends Monday night and Iowans can vote on the website IAbeef.org.

“The Flying Elbow in Marshalltown is featuring the Tombstone Burger which includes a blend of chuck brisket and short rib and it has also Wagyu beef that’s raised by a Marshalltown producer,” Peterson says. “And then the Ale ‘n Angus Pub burger is called the Holy Smokers Burger and it is an eight ounce certified Angus beef patty that’s topped with smoked beef brisket.”

This is the second year for the contest. New York challenged Iowa last year — and Iowa won. The winner will be announced on Tuesday.