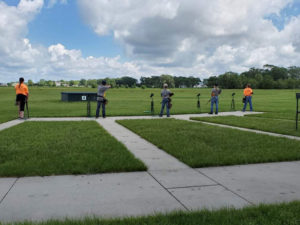 Kids from 110 teams have been shooting this week in the Scholastic Clay Target Program state championship north of Cedar Falls.

Iowa DNR Shooting Sports Coordinator, Chris Van Gorp, says it’s a sport that has really grown among kids. “The program’s been around in Iowa for 15 years, and we continue to see growth every year, the last couple of years, we’ve continued to see increased growth. This is our record year with attendance here at the state shoot. There’s actually over 4,200d kids enrolled in Iowa in the program,” Van Gorp says.

He says around three thousand of the kids participate in the shoot — which started with elementary and middle school kids Thursday and the high school events run today through Sunday.
“These trapshooting teams are coached by local volunteers that are willing to donate their time and give their time and expertise to organize a team and coach a team and mentor these youth through the season. And then some of the teams are affiliated with schools and can get varsity letter awards,” he says. 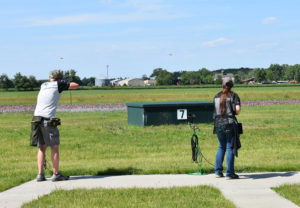 The state shoot is held at the Cedar Falls range. (DNR photo)

He says one of the draws to trapshooting is the wide range of kids who can participate. “The nice thing about clay target shooting is that you don’t have to be the biggest or the strongest, or the fastest,” according to Van Gorp, “pretty much anybody can do it and it’s a lifelong sport. What it does take is focus and commitment and perseverance.”

He says the trap teams learn about teamwork and gun safety. “We haven’t had any incidents with our youth with the firearms. The foremost principle that our coaches teach our athletes and safety first and fun — and if we happen to win along the way, that’s great. But without being safe and conscientious, we don’t have a program for the kids,” Van Gorp says.

Van Gorp says there is a cost involved as you need a gun, and you’ve got to buy ammunition and targets for practice. He says there are a lot of fundraising opportunities that the team does to help offset the costs. He says you have to maintain your focus and consistency to win at state.

“Our teams have league competitions throughout the season, that are usually a 50 target event. So they shoot two rounds of 25 targets for 50 targets total,” he explains. “The state championship event for our high schoolers is a 200 target event. There are eight rounds of 25 targets that they have to shoot in one day. So it’s a little bit more grueling, and to come out on top, you got to be able to get through all eight rounds.”

Van Gorp says the program has been adopted by about ten community colleges and ten four-year colleges in Iowa. He says those shooting sports programs give opportunities for kids to continue in competition after high school.