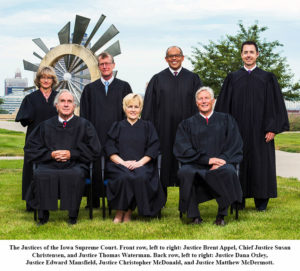 The Iowa Supreme Court has overturned its previous ruling on the Constitutional Right to Abortion.

The ruling says the Iowa Constitution is silent on the specific terms “abortion” and “pregnancy.” The High Court says there is no support for Planned Parenthood’s reading that the due process clause of the Consitution provides fundamental protection for abortion.

Governor Kim Reynolds released this statement in response to the Iowa Supreme Court’s abortion ruling:
“Today’s ruling is a significant victory in our fight to protect the unborn. The Iowa Supreme Court reversed its earlier 2018 decision, which made Iowa the most abortion-friendly state in the country. Every life is sacred and should be protected, and as long as I’m governor that is exactly what I will do.”

Iowa Democratic Party Chair Ross Wilburn released this statement:
“The majority of Iowans and the majority of Americans believe that abortion should be legal and not subject to the personal whims of a fringe minority. This decision introduces new barriers to accessing care and leaves Iowans exposed to even more attacks on our reproductive freedoms. We are one step closer to a future where Iowa Republicans could have free rein to outlaw abortion and restrict reproductive health care. I know that many of us feel afraid right now, but we have the power to elect Iowa Democrats this fall who will write the protections of Roe into law at both the federal and state level. This fight is not over – and I’m proud to stand alongside the Iowans organizing for a future where our personal freedoms are protected.”