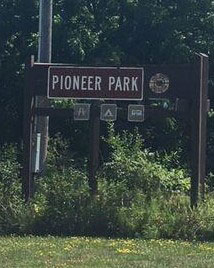 Unexpected patrons have occupied a restroom at a Page County park near Shenandoah — black widow spiders.

County conservation director John Schwab says crews discovered a large cluster of the venomous spiders at Pioneer Park during regular restroom maintenance. While the black widow is common throughout the country, Schwab says the large concentration was concerning.

“There’s probably an estimate between 20 and 30, which is a pretty good population,” Schwab says. “So just for safety until we get them cleared out, we’ve closed off the bathrooms.” While the exact reason the cluster of spiders was in the bathroom is unknown, Schwab says the isolated and grassy area likely provided a suitable habitat.

“They’re really attracted to basements, outbuildings, rocky structures, or debris sitting in your yard, so it’s not uncommon to have them in the area,” Schwab says. “The numbers that we saw was kind of what triggered us to say, ‘We need to do something about this.’ It could have been something as simple as a spring egg sack that hatched and all the spiders decided to hang around.”

Schwab says his department has treated the interior with insect foggers that will eventually be vacuumed and treated again. Crews are also treating the exterior of the building. While all spiders are venomous to an extent, Schwab advises park patrons to steer clear of the general area to avoid increased exposure.

“The thing with black widows and also brown recluses, is that humans are a little more susceptible to their venom,” Schwab says. “So pretty much just stay away from that bathroom — the rest of the bathrooms are fine.”

While it is common to run across one or two black widows or brown recluses every year, Schwab says this was one of the first times seeing a large and concentrated quantity. They hope to have the spiders removed by the end of the week.