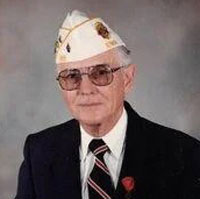 Iowans are encouraged to attend next week’s funeral for a World War Two veteran who worked as a funeral director more than five decades — and who’s only living relative is on the East Coast.

Hugh Bell of Shenandoah died June 2nd at age 98. Staci Shearer, a funeral director with the Hackett Livingston Funeral Home, says Bell shared many stories with her about his time as a civilian mortician for the Army Mortuary Service in the late 1960s.

“Kind of the heartache and the tragedy that he had to deal with during that time,” Shearer says, “but he felt it was such an important calling for him to be able to offer his services in order to prepare the casualties of the Vietnam War, to be able to go back to their families and back to their homes.”

Shearer met Bell some 15 years ago when he came into Hackett-Livingston with information regarding his own funeral arrangements, including an obituary he’d written for himself. She says Bell’s personality had a lasting impact on the facility’s caregivers.  “As I took him back to the funeral home, there was just a lot of tears shed, and you could definitely tell a piece of an important resident was no longer going to be at the facility,” Shearer says. “He was definitely a very loved guy.”

Bell’s only relative is a nephew in Warwick, Rhode Island, so Iowa Funeral Directors Association manager Taylor Teags wants as many people as possible at Bell’s funeral. Teags says it’s the last chance to honor his military service and 50-plus years as a funeral director.

“It means a lot when people can turn up and show up and just take a half-an-hour of their day to honor someone,” Teags says. “Even though he’s not here to see it, it just as a whole, is really awesome to be able to say that we took the time to honor someone like him.”

Born in McCook, Nebraska, Bell was a 1942 Shenandoah High School graduate. He was drafted into the U.S. Army in 1943, earned his pilot’s wings and an officer’s commission in 1944, and trained pilots in the A-20 and A-26 light bombers. After the war ended, Bell became a troop carrier pilot visiting 33 countries and flying across 25 others before being released from the Air Force in 1953. After his time in the military, Bell spent 55 years as a licensed funeral director in Iowa, Nebraska, Kansas and Arizona.