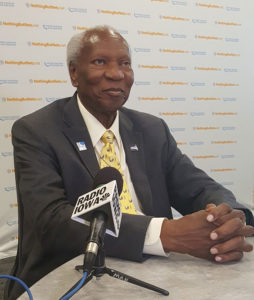 International opera star Simon Estes, a Centerville native, says his nearly six-decade-long career on the opera stage is drawing to a close.

“Most opera singers retire between 50 and 60 years of age…I’m almost 84 and a half,” Estes said, with a laugh. “I’ll be 85 my next birthday in March.” Estes, a baritone, plans to continue singing and advising students at Iowa State and the Des Moines Area Community College — but he will retire from opera after his last performance in Porgy and Bess with the Des Moines Metro Opera on July 24th.

“I really thank God that he’s given me this longevity not only in life, but having sung opera — I made my debut in West Berlin in 1965,” Estes said. Opera requires substantial strength in the singer’s core to control breathing and project the voice.

Estes says there are some key reasons he’s been able to perform opera into his 80s. “First of all, I think God gave me very special vocal cords or vocal folks, as the doctor’s say,” Estes says “…I never smoked. I didn’t drink alcohol. I didn’t take any drugs, of course…I was very disciplined always. I only sang the right repertoire at the right time in my life.”

Estes made his comments during an interview on Talk of Iowa on Iowa Public Radio. Estes played the lead in Porgy and Bess at the New York Metropolitan Opera in 1985. This month’s seven performances of Porgy and Bess at the Des Moines Metro Opera have been sold out. Estes is playing the role of the lawyer and is also a producing advisor for the run of the show.

Estes is a graduate of the University of Iowa and the Juilliard School of Music. He has performed more than 100 roles with 84 major opera companies around the globe.