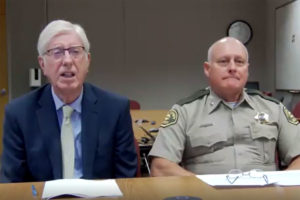 “They’re strips of paper that can tell people whether fentanyl is in a product or not. This is a harm reduction program. A harm reduction measure that really makes sense,” according to Miller. “Recently, two states Wisconsin and Georgia, a blue state and a red state have both enacted this. This should not be a partisan issue.”

Miller is a Democrat and says there should also be expanded use of naloxone — which can reverse an opioid overdose. Miller was joined by fellow Democrat and Story County Sheriff Paul Fitzgerald. Fitzgerald says fentanyl test strips detect the presence of the drug and can help save lives.

“This will allow the user to be able to either test the batch they have and if fentanyl … is present during them, they can at that time choose a different batch. They can use less of what they have. They can have the option to have others there when they use it or have Narcan available,” Fitzgerald says. The Sheriff says the Central Iowa Drug Task Force in Boone and Story County have had 10 fentanyl overdose cases, resulting in 3 deaths.

Miller also urges people to seek treatment for their drug addiction. Miller says he talked with a few legislative leaders this past session about making the fentanyl test strips legal.
“Got a, got a sort of a mixed reaction or at least an openness. So, you know, it’s something we’ll explore as we go out the rest of the year and into next year,” Miller says. Miller is running for re-election and says he hopes this will be a bipartisan issue.

Republican Governor Kim Reynolds hosted a news conference about two weeks ago with the head of the Department of Public Safety and others to talk about the dangers of fentanyl-lace pills. Reynolds did not talk about any specific legislation to address the issue — but was critical of the Biden Administration’s border policy– saying it is part of the reason the dangerous pills have become so prevalent in the U.S.