You are here: Home / News / Storm leaves damage in Winneshiek and Allamakee Counties 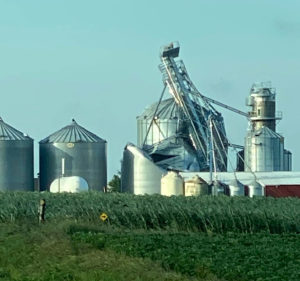 Severe weather caused power outages and property damage in northeast Iowa this weekend. At the height of the storm, about 12,000 customers had lost power.

“A lot of tree damage, a lot of downed power lines,” said Sean Snyder, emergency management coordinator in Winneshiek County. “The City of Calmar was the hardest hit. NICC, South Winneshiek School District was hit as well as the residents of Calmar.”

Snyder said there was structural damage to the Northeast Iowa Community College campus in Calmar. The Fidelity Bank will be closed Monday due because of damage to the building on Calmar’s Main Street.

Todd Shea with the National Weather Service office in La Crosse, Wisconsin, said their initial assessment is the damage in Calmar was caused by straight line winds.

“From what it appears from surveying and talking to officials in the area, we had just kind of a downburst or a swath of very intense thunderstorm winds that rolled through mainly the western and southern ends of the community,” Shea said.

Calmar received three inches of rain as well. Nearly four inches fell in Decorah and storm damage closed a 13-mile bike trail around Decorah. In Allamakee County, a 60 mile an hour wind gust was recorded in Waukon and the Waukon City Park and Campground were damaged.