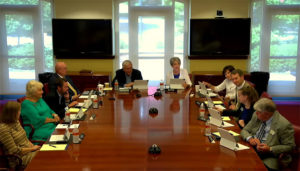 The Board of Regents during their meeting. (screenshot form meeting)

The Board of Regents approved the second and final reading of the tuition increase for students at the three state universities during their meeting Thursday Brad Berg of the Regent’s staff says there were no changes between the first and final reading.

“The base undergraduate resident tuition rates include a $355 increase to a new rate of $8,711 at the University of Iowa, a $354 increase to $8,678 at Iowa State an increase of $331 dollars to $8,111 at UNI,” Berg says.
The Regents also approve various mandatory fee increases for the schools.

Iowa State University student body president Jacob Ludwig says he’s concerned how it will impact low-income students. “I know a lot of students out there that, you know, are working 30,40 hours a week on top of trying to be a student, and, every cent matters,” he says.

The University of Iowa’s vice president of graduate student government, Riley Post says he’s concerned about the economic burden of higher education shifting from the state to students. “Something’s got to give. Especially now with interest rates rising on student loans, it’s going to make it a very difficult decision for a lot of people as to whether or not they decide to go on and get a post graduate education,” he says.

The Iowa Legislature increased university funding by five million dollars — but that was 15 million dollars short of what the Board of Regents requested. Board officials say the tuition hike is needed to keep up with inflationary costs.

(Kendall Crawford of Iowa Public Radio contributed to this story.)