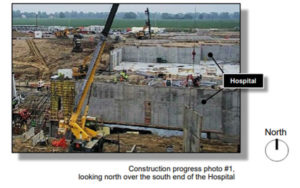 The Board of Regents has approved a 33% budget increase for the University of Iowa’s new hospital under construction in North Liberty. The increase takes the budget from $395 million to just under $526 million.

U-I Hospitals and Clinics interim CEO, Kimberly Hunter, says inflation has hit the costs of construction just like everything else. “We all know what we hear on the news and what we all experience at the gas station and in the grocery store and the construction industry has challenges as well, right with inflation not only in the United States, but worldwide, the prices of raw materials continue to climb and the availability of them is more challenging,” Hunter says. She says that is compounded by the local trade labor experiencing shortages of workers. 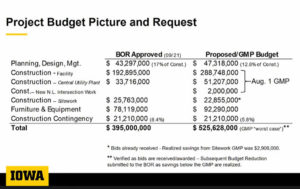 Hunter says they did look at putting the project on hold to wait for prices to come back down. “We really considered that, but understand that the impact of delaying our project is significant on patient care,” Hunter says. “Healthcare access for Iowans would be reduced. And the complexity of providing complex care to our patients is already strained.” She says a delay in getting the new facility open would further strain the system that is already at 99 percent of capacity.

Hunter says there doesn’t appear to be a significant turnaround in these issues in the near future. “We anticipate that construction costs will continue to increase and increase you know, past August 1. And feature costs remain unclear. So we know that the world they’re worse with Russia and Ukraine and wouldn’t you know it, there’s a third and the fourth largest aluminum producers in the world. And that impacts multiple building systems,” according to Hunter.

Hunter says they also looked at shelving some of the space and cutting back — but she says they are going to eventually need it. U-I Senior Vice President of Finance, Rod Lehnertz, agreed with her about delaying some portions of the building.
“Once you have a hospital under operation — we learned this every day in the main hospital –disruptions to the service into the patient care to go back in and do projects later often at a higher cost, turn into later regrets,” he says.

The original estimate for the cost of the North Liberty Hospital was $230 million. The plan to build the facility was opposed by private hospitals in the area which said it would duplicate services already provided. The State Health Facilities Council denied the first attempt to get a “certificate of need” for the hospital saying it would duplicate services in the area.

The UIHC came back and emphasized the teaching of new doctors and expanded access to specialized care, and the state council reversed itself and gave approval. The Board of Regents approved the budget change at their meeting last week.