You are here: Home / News / Northwest Iowa health officials give update on monkeypox 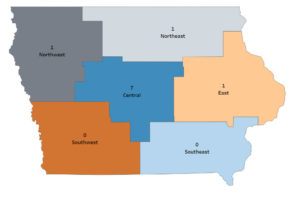 Public Health officials in northwestern Iowa released an update on monkeypox today following the discovery of a case there on July 25th.

The deputy director of Sioux District Health, Tyler Brock, says there have been no new cases of monkeypox confirmed, and there is no concern about spread. “This takes very close contact, prolonged contact, with someone who actually has it. Their body fluids, the sores the scabs, the rashes. Getting monkeypox through some type of casual random event is really not the way this is being spread right now,” Brock says.

Those who are infected with monkeypox will have swollen lymph nodes and a rash. “People are only infectious when they have the rash so that’s another reason why this isn’t being passed by people who don’t know they have monkeypox — I suppose it’s possible — but in general, you’re not you’re only contagious while you actually have the lesions,” Brock says.

Brock says the vaccine developed for smallpox is used for monkeypox, and there is some question about its effectiveness. He says most of the cases are being spread by one population group in particular. “Men who are having sex with men. It’s not that that’s the only group of folks that can get monkeypox but it is where people you know the vast vast majority of cases are in that population right now,” according to Brock. “So again, the general population most folks are not at high risk for monkeypox right now.”

The northwest Iowa case is one of ten confirmed cases overall in Iowa. There are also seven cases confirmed in the central Iowa region, and one each in the northeast and east regions of the state. In the states surrounding Iowa, South Dakota has one case, Nebraska and Missouri each have ten cases, Minnesota has 38, Wisconsin 19, and Illinois has 533.