You are here: Home / News / DNR asking for help in counting wild turkeys 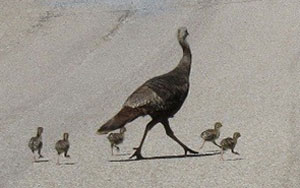 The Iowa DNR is in the midst of its annual wild turkey count and is looking for some help.

Wildlife Biologist, Jim Coffey, leads the survey. “We asked the general public if they do see wild turkeys go to the Iowa DNR webpage under the turkey tab, and they can report those sightings. And that helps us get a good indication of the productivity for the summer,” Coffey says.

He says the population has been pretty strong. “The last couple of years we’ve had good production. This year has been a little bit mixed with the early hatch — that seems to be down — but the second hatch seems to be up.” Coffey says. “And that’s usually a pretty good indicator in drought year conditions. We usually see pretty good nest success and drought years.”

You could see wild turkeys in a variety of places. “The first nest attempt is usually in some thicker covered has to be in the Woodlands,” he explains. “The last nest attempt will be out basically anywhere. But we tend to think in those areas like shrubs, raspberries, and plum thickets and things like that, it provides good overhead cover.”

Coffey says the turkeys like that overhead cover to protect them from predators. You are most likely to see hens, which will gather together in groups to watch over the young birds. “The males do not care about the rest of them until springtime. So, you typically don’t see males with the hens this time of the year. But we do still count males in part of the survey — there is a section for that if people see males and male groups,” Coffey says.

Coffey says they typically see 50,000 wild turkey licenses purchased each year — but most hunters never bag a bird.
“That’s usually a surprise to people — we were pretty consistent with about a 22% success rate from year to year,” he says, “and I think people have kind of forgotten or we’ve gotten used to the fact that we think that everybody that buys a license should be successful. And that’s far from the truth. It is a hunt. It is challenging, and that’s what makes turkey hunting exciting. ”

Coffey says they consistently see from 11 to 12,000 wild turkeys harvested in the springtime each year. He says they have a fall season, but it is not as popular among hunters. To learn more about wild turkey hunting or to report your turkey sighting, go to iowadnr.gov. The turkey survey lasts through August.