You are here: Home / Business / With humble beginnings in Ames, snack goes national in Walmarts 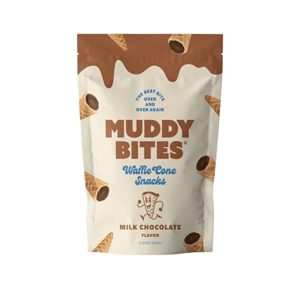 A small company that makes tasty treats was launched in an Iowa State University dorm room, and it will soon have its products on the shelves of a major national retail chain.

Le Mars native Jarod Steffes, one of the co-founders of Muddy Bites, describes his simple idea that quickly morphed into an expanding business, offering the nummy nibbles in milk chocolate, dark chocolate and white chocolate.

Steffes came up with the concept when he was still an ISU student and he needed a partner. Enter Tyler De Vos, who lived just down the hall.

“I could do marketing a little bit, but I didn’t know how to make food whatsoever. I knew nothing about producing food, manufacturing, all that stuff and immediately thought of my network — who does?” Steffes says. “At the time, Tyler had started a barbecue sauce company out of his dorm room and so I was like, ‘Hey, I’ve got this idea, you know a little bit at least about food, like, can you help me with this idea?'”

Steffes says De Vos only need to consider for about 30 seconds before agreeing to be a part of the project. From the start, the business partners decided to split up the workload.

“He’s running more of the operational side of things and figuring out how to actually make Muddy Bites on a mass scale,” Steffes says, “and I kind of run all the other branding, social media/marketing side of the business. We really started that in 2018, and the idea really started in 2019 when we launched on Kickstarter.”

A crew of ISU students created the first batches of Muddy Bites, which are now manufactured in North Sioux City, South Dakota. The treats are already for sale in 5,200 stores nationwide.

The big break came earlier this year, when they competed with several thousand other firms in a “product showcase” before Walmart executives in Arkansas. Muddy Bites was among the products chosen for sale at Walmarts across the country.