You are here: Home / Education / Regents to go ahead with request for additional state funding 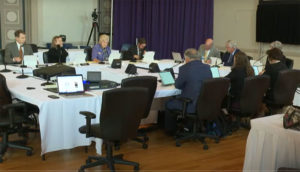 Board of Regents meeting.

The board which governs the three state universities will ask the Iowa Legislature to increase funding for the schools by $32 million next year.

University of Northern Iowa President Mark Nook says they want to use the extra money to help with tuition. He says there should be a bigger difference between what students pay at UNI compared to the research schools. “The four million that we are asking for to help us differentiate will help us keep our tuition down for all of our students, provide better access for students across the state of Iowa,” Nook says.

University of Iowa president, Barbra Wilson, says they will target one particular area. “We are really laser-focused on nursing. This is one of the workforce issues I think president Nook pointed this out already. People are calling on the need for more nursing — not just in Iowa — but across the country,” Wilson says. Wilson says they are also looking to bring in more first-generation college students.

Iowa State University President Wendy Wintersteen says the amount of money coming from the state has gone up and down in the last decade, but is currently about the same as it was in 2014. “And when you factor in inflation it’s more like a 25 percent decrease in funding because of the purchasing power of a dollar that has declined so much,” Wintersteen says.

The request is nearly 7% more than what was approved last year. The legislature approved a $5.5 million increase — which was about one third of what the universities had requested.