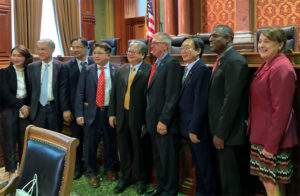 Some members of the delegation from Taiwan. (RI photo)

Officials from Taiwan have agreed to buy $2.6 billion worth of U.S. corn, soybeans, and dried distillers grain. Representatives of Iowa commodity groups joined Taiwan officials at the Iowa Capitol for a signing ceremony.

Johnson Chiang, director general of the country’s Economic and Cultural Office in Chicago, was part of the delegation.

“We want to have more cooperation with Iowa in addition to purchasing agriculture products, but also I think we enough areas in high technologies because Taiwan is also one of the leading contributors to the high technology supply chain,” he said, a reference to Taiwan’s status as the world’s largest supplier of computer chips.

“Trade matters to Iowa,” said Mike Naig, the Iowa Secretary of Agriculture. “As a leading exporter of food and agriculture products, we see great value in the type of commitment that you all signed today and that continues to build upon a relationship that we are maintaining and building throughout time.”

Governor Kim Reynolds said Iowa exports to Taiwan have increased in the past five years and are on pace to be higher this year as well. “Taiwan’s economic clout is substantial,” Reynolds said. “It’s the 12th largest purchaser of Iowa products, with a total of $304 million of (Iowa) goods sold in Taiwan last year.”

The Taiwanese delegation is on a goodwill mission to the United States and has spent the past two days in Iowa. Chin-Chang Huang, the deputy minister of Taiwan’s Council of Agriculture, said he was intrigued by Iowa State University programs on climate change and sustainable agriculture and plans to recommend his government establish agreements with ISU, “and also send our people to study at Iowa State University,” he said.