You are here: Home / Politics / Govt / Iowa’s 2022 election a red wave in all but one statewide race 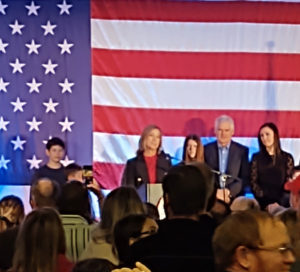 It appears to be an Iowa GOP sweep of all but one statewide race in this year’s General Election,

“It’s been an incredible campaign…and I’m excited to say to you tonight that we are not yet done because the best is yet to come,” Governor Kim Reynolds said. Reynolds defeated Democrat Deidre Dejear by 20 points. Reynolds has been governor since mid-2017.

“We are not stopping. We are not slowing down. I am so excited to get back to work and to lay out a bold, conservative agenda and to follow through with what we say we’re going to do.”

Reynolds said after floods, drought, tornadoes, and a pandemic, she’s ready for the next challenge. The governor made it clear she’ll ask legislators to pass a “school choice” bill to give parents state funding to cover private school tuition costs for their kids.

“It is going to be an agenda where you keep more of your money, where our schools are thriving and all parents have a choice,” Reynolds said, “where you government works for you, not the other way around.” Reynolds used part of her victory speech to praise her opponent. “She worked hard,” Reynolds said. “She traveled across Iowa to take her message to the people and while we have our differences, we both want Iowa to succeed and that’s how it should be.”

DeJear said running against an incumbent governor had been incredibly difficult. “I am extremely proud of the progress that we have been able to make,” DeJear said. “….Every day out of the week, democracy is worth fighting for.” DeJear told supporters not to give up fighting for the issues that were the basis of her campaign. “Coretta Scott King said the fight freedom is fought and won at every generation. We can’t let up,” DeJear said. 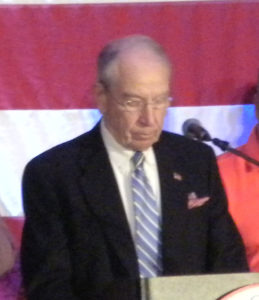 “I thank you for your trust in me over a long period of time,” Grassley said. “I’m in a position to do a lot for Iowa.” Grassley suggested Iowa voters have sent a message to Washington.

“The people have spoken tonight,” Grassley said. “In America we respect, revere and reflect the voice and the will of the American people.” Franken urged his supporters not to give up on politics.  “For anyone who feels like their voice wasn’t heard, your story isn’t over — not by a long shot,” Franken said. “Rest, regroup, keep building and live to raise your voice another day.”

Franken said his race against Grassley had been hard fought, but it was time to concede. “Tonight, the Iowans around us have spoken and as citizens across this great nation may every vote be counted, may every outcome be accepted and may every transition be gracious,” Franken said, to applause.