You are here: Home / News / Iowa Lottery to start making some payments via debit cards 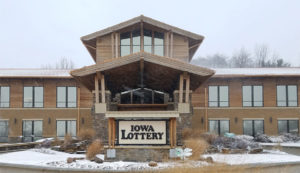 The Iowa Lottery plans to move to some more modern methods of payment for prizes in the new year.

Lottery spokesperson, Mary Neubauer, says paper checks had been the standard. “It just became obvious pretty quickly that a check, which is the primary form of payment that you will receive, especially if you come to an Iowa Lottery office today, a check just isn’t used as much today, as it once was, ” Neubauer says.

She says a working group in the organization studied the options and what Lottery customers want. “People are looking for options that have, first of all, greater speed, and second of all, more convenience,” she says. Neubauer says cash payments won’t go away, but they do plan to start using prepaid debit cards that allow retailers or Lottery offices to load the prize money onto the card.

“So if you go into a store, certainly cash would continue to be an option. But for example, if it’s a store, and it’s late at night, and the store doesn’t have a lot of cash on hand, a lot of times right now that store isn’t able to pay your prize,” Neubauer says. Neubauer says retailers could pay prizes from $20 up to $600 on the cards — while lottery offices could use the prepaid debit cards for prizes from 20 up to five-thousand dollars. They hope to start a pilot project with the debit cards in six months.

The other change would allow prizes that have to be redeemed at Iowa Lottery offices to be made through what’s called an ACH payment that goes directly into a person’s bank account. “So the person wouldn’t get a hardcopy check, they wouldn’t have to cash it, they wouldn’t have to, you know, drive somewhere, or do that electronically, the payment would just be made directly into their account,” Neubauer says. “It’s going to take a little bit more time to put that in place, we’re looking at that probably somewhere in the second half of calendar year 2023, or at the end of fiscal year 2023.”

The ACH prize payments could go up to five million dollars. Neubauer says they are only making a couple of changes because they have to be very careful about the security surrounding the prize money. “There are so many forms of payment available in the marketplace today, especially when it comes to you know, consumers just paying each other money or sending money to each other. But we have to make sure that the security procedures in place and that whatever payment option we would be looking at that it has staying power,” she says.

Neubauer says the large jackpots from lotto games would still be paid out by wire transfer, as that is the safest method.