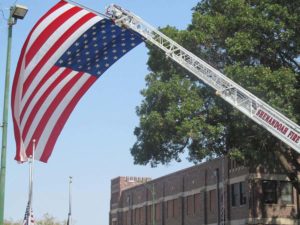 While most of us look back at last year’s terrorist attacks with feelings of sadness and anger, some Iowans still live in fear of being targets of revenge.

Born in India, Harliv Kaur wears a turban as part of her Sikh faith. She moved to the U.S. at age five, and now at 26, she’s used to getting stares, but says the looks changed a year ago and remain.

She says, “It’s a different kind of a stare. It’s not just a ‘I wonder who they are’ it’s more of a ‘Oh, they might be terrorists’ kind of a stare.” Kaur’s relatives warned her after Nine-Eleven her turban might make her a target.

Kaur says she welcomes questions, saying, “I love it when people come up to me and ask me, ‘So why is it you wear this turban or what is your belief or where are you from?'”

She says others make assumptions about her that are incorrect and unfair. Kaur remains cautious in public, especially at night, and still gets more than her share of scrutiny at airport security stops. During a recent flight, she was checked four times within ten minutes.

“That was a little uncomfortable,” she says.

Kaur grew up on the U.S. West Coast and recently moved to central Iowa after getting married.

“Things have definitely gotten better,” she says. “People…in the Midwest have been much more open than I expected. Being from California, I never really felt like a minority out there…but in the Midwest, we are much more noticeable.”

Sikhism is the world’s fifth-largest religion with 22-million Sikhs globally and 500,000 in the U.S.