You are here: Home / Recreation / Entertainment / Exasperated Black is back in Iowa to vent anger, bring laughs 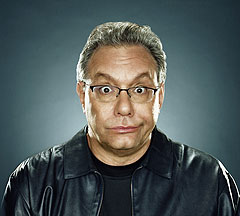 A comedian who bills himself as the most exasperated man in America returns to a Des Moines stage this weekend to vent his frustrations. Lewis Black blasts everything from politics and religion to celebrities and Homeland Security.

The 58-year-old Maryland native says he’s surrounded by things that bug him. “I wake up. I read the paper. There’s just a series of irritants. They’re just out there. You look at what this country can be and you look at what it is. You’ve gotta’ be an idiot not to think there’s something to be upset about.”

Black has plenty to be happy about, too. The regular on Comedy Central’s “Daily Show” won the Grammy in February for Best Comedy Album. Plus, he’s one of the highest-grossing comedians on tour today. He’s also working on his second book and a TV pilot — starring himself. His anger is part of the act, but Black says it’s also how he really feels, although he says blowing off steam at the audience helps him to lead a more zen-like life.

Black says “I kind of control it a bit now more because I get to get rid of a lot of it on stage. What’s great is, a lot of the things that irritate me, certain things happen, you deal with people at the airports, you deal with people at the Department of Motor Vehicles and all that stuff. Instead of yelling at them, I just save it up for when I’m going to be on stage that night.”

Black says one of his biggest hot-button issues is the stupidity displayed every day in our government leaders at all levels. He says he skewers elected officials and candidates in all parties and has only one favorite in the upcoming presidential race — Santa Claus.

Black says “The Democrats and Republicans have been at each others’ throats and it just gets worse. Even though they say they’re going to work it out, they don’t work it out. The only one I think that can bring us together is Santa. Everybody loves Santa. Even we Jews love Santa.”

Black’s TV pilot is called “The Root of All Evil” and features himself as the judge of a mock courtroom, listening to debate from other comedians about who’s more evil, Paris Hilton or Dick Cheney. His new book will zero in on religion, which makes him quip: “That should finish my career off.” Black’s appearing Saturday night at the Civic Center of Greater Des Moines .