You are here: Home / Outdoors / Bobolinks making a comeback in Iowa 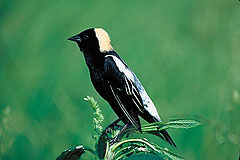 The song of a rare bird is being heard more frequently in Iowa, much to the delight of bird watchers and environmentalists. The bobolink was once plentiful in Iowa, back in the day when its habitat of tall-grass prairie covered much of the state.

Naturalist Joe Boyles, with Polk County Conservation, says bobolinks are making a comeback. Boyles says, "We think of the bobolink as one of those indicator species that indicates the quality of habitat and when we start getting them nesting back into some of our natural areas, that tells us that we’re doing some things right." In recent years, the Chichaqua Bottoms Greenbelt in Polk County has grown to more than ten square miles of reconstructed tall-grass praire, wetlands and woodlands — what Boyles says is the perfect playground for flocks of bobolinks.

Boyles says: "They’ve become increasingly rare in Iowa because they are adapted to living in the grasslands and they loved the tall-grass prairies that once covered most of the state of Iowa and as that habitat disappeared, so did the birds that need that habitat. They are rare here in the state but they are starting to increase again." While the female bobolink is a plain brown, the male is easily recognized.

Boyles says, "It’s a little smaller than a robin. The male is mostly black. It has yellow on the top of its head with white on its back so its colors are kind of reversed compared to a lot of the other birds we think of. Oftentimes we think of the light colored breast and the dark colored back." Boyles says you won’t likely see bobolinks in town, but more of them are they’re bob-bob-bobbing around Iowa’s rural areas.