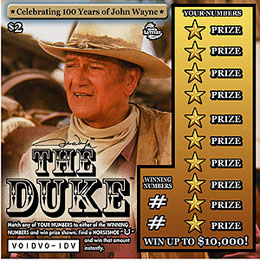 Things are ramping up for the centennial celebration of the May 26th birth of actor John Wayne in Winterset. Part of the events included the Iowa Lottery unveiling a set of three new scratch tickets today that feature Wayne. Lottery CEO Ed Stanek says the ticket is the first to feature the man known as "The Duke."

Stanek says it’s a two-dollar ticket that feature photos from three of Wayne’s movies. The tickets have top prizes of $10,000, and there are 10 of the top prizes in the 600,000 tickets available. The Iowa Lottery plans to give away a couple of thousand tickets at stops throughout the state, and at the Madison County Fairgrounds during the birthday celebration for Wayne on May 26th. Stanek says they’ll also be giving away t-shirts and blankets and hats featuring John Wayne as he says they celebrate "one of Iowa’s most famous citizens."

The John Wayne Birthplace Society is holding the centennial birthday celebration in Winterset from the 25th through the 27th. Part of the celebration includes a groundbreaking for a new John Wayne museum. David Trask, the chair of the board of the society, calls Wayne is an "American icon."

"I believe that he characterized more than anybody else, those things about our county that so many people think made our country great," Trask says, "And that’s why it’s important that we celebrate John Wayne, and that’s why it’s important that we build this museum that is comparable in stature to the man himself in a place where people can come and learn more about his life."

Trask says the Wayne family has donated money for a statue that will be unveiled on the 26th at the groundbreaking for the museum. Trask had other news about the progress of the museum. He says they received their fist six-figure contribution from the Irwin family of Oklahoma City this week. The Irwin family runs car dealerships, including one in Winterset, and they’ve also donated a commemorative John Wayne saddle that’ll be raffled to help fund a theatre at the museum.

Trask was asked if John Wayne might’ve tried a lotter scratch ticket. "John Wayne lived a very full life," Trask said and then laughed. "Yes, I’m sure you could say he probably gambled some in his movies, and smoked a few cigarettes and drank some whiskey as well." Trask says they’re not claiming Wayne was a perfect individual, but says Wayne did exemplify those qualities that people associate with the greatness of America.

Stanek says The Iowa Lottery has to send its proceeds from the Wayne ticket sales to the state general fund. But, he says the company that is producing the tickets will make a 24-hundred dollar donation to the museum effort. Trask says they hope to be able to open the museum in 2009.