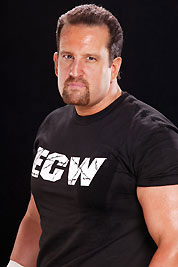 A man who calls himself the "Innovator of Violence" is among the professional wrestling stars who’ll appear in Des Moines next week. Thirty-six-year-old Tommy Dreamer has loved wrestling since high school. The six-foot-two, 225-pound New Yorker can list off more snapped bones, skull-jarring concussions and bloody casualties in his career than practically Evil Knievel, but his passion for the challenge is unstoppable.

In a phone interview with Radio Iowa, Dreamer says: "As long as my body holds out, I’m going to keep on going. I figure I’ve broken so many parts already and I keep going so maybe I’ll be wrestling until I’m 60 or 70. Just push me out there in a wheelchair, I’ll get out of it, wrestle, and then somebody can pin me or I’ll pin them." Dreamer already holds a host of championship titles and someday hopes to see himself in the Hall of Fame.

For now, he says he’s not thinking about the packed arena crowd or the millions of TV viewers, but how he’ll take down and crush whoever else gets put in the ring. He says it’s easy to get psyched up for a match, knowing how many fans are intently watching.

Dreamer says, "When I’m at home and I’ll stub my toe, I’ll run around screaming like a little girl. But the energy and the adrenaline I get performing in front of people, most of the times I feel no pain. That’s how I go out there and do it. After the match, I’ll usually collapse and cry in the back, but out there, I’m pretty good." Some critics body-slam pro wrestling as being fake, but Dreamer says he endures extreme physical confrontations and has a simple comeback for the unbelievers.

Dreamer says: "I’ve had 16 concussions. I’ve broken my neck, broken my nose three times, broken my back, torn my pec, torn my shoulder, torn my bicep, banged up knees, don’t even know how many stitches I’ve had, broken 13 fingers, which really stinks because you only have ten, broke my heel — I wish these were fake injuries, but they’re not." The Extreme Championship Wrestling and Smackdown events are next Tuesday, May 22nd, at the Iowa Events Center in Des Moines.