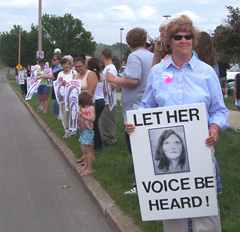 Family and friends of an eastern Iowa girl, who was kidnapped and killed two years ago, gathered in Des Moines Monday for a rally. Jetseta Gage of Cedar Rapids was 10 year old at the time of her death.

Her family is hoping the Iowa Supreme Court will allow a videotaped interview with Jetseta to be used in the trial of the man accused of molesting her, James Bentley. Jetseta’s uncle, Larry Slight, stood outside the Iowa Judicial Building holding a sign that read ‘let her voice be heard’. "Without that tape (prosecutors) say they not going to be able to try him over this," Slight says, "so we want her voice to be heard and justice done."

Slight is also hoping to send a message to legislators, hoping they’ll change laws to allow children to avoid testifying in court in person. Slight says he’s never testified in court but has watched court proceedings, "and it’s pretty intimidating back there." He says he can’t imagine what it would be like for a child to testify before his or her accused perpetrator.

The Iowa Supreme Court will hear arguments Wednesday on whether the taped interview with Gage should be allowed in James Bentley’s trial. Bentley’s brother Roger was convicted in the death of Gage. He is now serving life in prison.