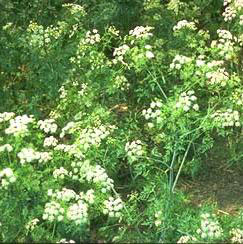 Savvy hikers and other outdoor lovers know what poison ivy looks like, and now state environmentalists say they should also know another dangerous plant on sight. DNR forester John Walkowiak says the infamous poison hemlock grows up to eight-feet tall with bunches of white flowers.

While it resembles Queen Anne’s Lace, he says hemlock is a member of the wild carrot family. Walkowiak says: "It’s really possible you can mistake it for wild carrot. Its large size, the white flowers, the umbrella-type growth of the plant itself, and usually it’s not out there one plant at a time, it’s usually in dense clusters of the same type." He says poison hemlock grows in moist open areas along roadsides, railroad right-of-ways, stream banks, irrigation ditches and hiking trails.

Walkowiak says it’s a concern in Iowa, especially for farmers. He says, "It can be eaten by domestic livestock, your horses, goats, other animals, and it is toxic to them. The roots, as well as the stem, the flowers, including the seeds, can be very toxic and dangerous to your animals." He says the smooth stem is light green, thick-looking but hollow, and is marked with purple spots or streaks — a definite identifier.

Walkowiak says it’s dangerous to touch so repeated mowing will eventually kill it. He says: "You can get it mowed down and basically cause the plant to continually re-sprout which uses up its energy reserves, so constant mowing is one way to gradually eliminate it. Be careful. You cannot be using that in your hay because even when it’s dry, it’s still deadly to domestic livestock."

He says to contact your nearest Iowa State University County Extension office for more advice on control and identification of poison hemlock. In ancient Greece, the plant was used to poison political prisoners. When philosopher Socrates was condemned to die, he reportedly drank the poisonous juice to kill himself.