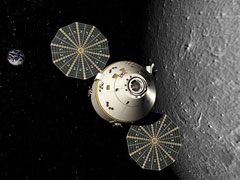 When American astronauts return to the moon in the coming years, they’ll be soaring through the vacuum of space in vehicles made, in part, from Iowa metal. John Riches, spokesman for Quad Cities-based Alcoa, says they’ve signed a contract with NASA to supply aluminum lithium for building the next generation of spacecraft that will replace the current space shuttles.

Riches says: “Aluminum lithium is a combination, as it sounds like, of aluminum and lithium to create a very high-strength product that has low density which is important for the kind of application you use either for space or for aerospace for aircraft.” The world’s top aluminum producer, Alcoa is based in Riverdale, just east of Davenport, and its metal goes into all sorts of products — from soda cans and Reynolds Wrap to car wheels and 747 jetliners.

Riches says the new contract with NASA is for 16-point-seven million dollars. “We don’t really have a number of pounds or tons,” Riches says, “the work actually begins this year. We’ll begin supplying some material to them next year but part of this is to develop the flow path to make this because it’s material they have not ordered before and we haven’t produced it quite the way they would like it produced before so there’s some development work we’ll be doing this year before we begin supplying material to them next year.”

He says the aluminum lithium will be supplied to NASA both in sheets and in metal ingots for the building of the “Orion” crew launch vehicles, or C-L-Vs. Riches says, “It really won’t mean any new workers but we’re excited to be part of the development of the new C-L-V and this design because hopefully that will lead to additional orders as they actually begin to produce these vehicles in the future.”

He says this won’t be Alcoa’s first venture into orbit as they’ve supplied aluminum for decades that went into rockets and various space vehicles, including the current shuttle fleet.