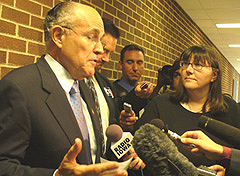 Republican candidate Rudy Giuliani says if he’s elected president, he will appoint U.S. Supreme Court who strictly interpret the wording of the U.S. Constitution — and he will not ask potential justices their views on the controversial decision which legalized abortion in the U.S.

"The abortion question is not a litmus test. Roe v. Wade is not a litmus test. No particular case is a litmus test…This is my humble opinion as somebody who’s practiced in the federal courts — even argued before the Supreme Court — that’s not the way to appoint a Supreme Court justice or any judge," Giuliani told reporters. "Any real good candidate for judge when you ask them that question will tell you, ‘I don’t know the answer to that question and I will not know the answer until I hear the legal arguments in the case. Otherwise, why do we have legal argument if not to give judges a chance to change their minds?"

Giuliani made his comments this morning to reporters in Council Bluffs. Moments before, Giuliani had outlined for a crowd of about 200 what he called his "judicial philosophy."

"We have to appoint strict constructionist judges because judges interpret the Constitution. They should not be allowed to make it up," Giuliani said. "You see, if they’re allowed to create what they believe the Constitution means, then our whole system of democracy becomes flawed."

Giuliani promised to pick justices for the Supreme Court who rule based on what the Constitution says, not what they’d like it to say.

When he was mayor of New York City, Giuliani had the authority to appoint judges. Critics say he appointed an abortion rights supporter, somebody who was an officer in a group representing gay judges — and very few Republicans.

"Those six Republicans that I appointed…had to move into New York City in order to get appointed," Giuliani told reporters. "I think proportionally I appointed as many Republican judges as you could appoint in a city that’s about five- or six-to-one Democratic and the reason for my appointment of those judges is quite different than the reason you’d appoint federal judges. I was appointing criminal court judges. I was appointing judges that largely set bail."

Giuliani said his record of appointing judges who were "tough on criminal law matters" is "pretty good." Giuliani said none of the judges he appointed were deciding constitutional issues.

You can listen to Giuliani’s question-and-answer session with reporters in Council Bluffs by clicking on the audio link below. Giuliani is campaigning in western Iowa today.  Tomorrow, he’ll made four stops in eastern Iowa.