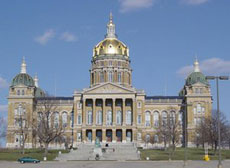 Iowa’s State Capitol Complex in Des Moines is in the midst of a major renovation. Paul Carlson, with the Iowa Department of Administrative Services, says it’s probably the biggest improvement project to the area in decades. The most obvious change is the removal of a big parking lot on the west side of the capitol. That area now features a terrace, with walkways and added green space.

Perhaps the biggest project is a new building to house 1,100 state employees. Carlson says the building, and an adjacent parking ramp, will cost about 77 million dollars. The legislature has budgeted for the project. The new building, to be located to the north of the statehouse, will replace the Wallace State Office Building.

Carlson says estimates show it would cost 40 million dollars to renovate the Wallace Building. Carlson say the new building will bring savings to Iowa taxpayers. "Essentially, what it does, is moves state employees out of more expensive lease space into state government buildings, which cost less for space," Carlson says.

The new 350,000 square foot building is expected to open in 2010. The building will be connected to a four-story parking lot by a skywalk. Carlson says officials are discussing the possibility of saving the familiar glass reflection wall on the outside of the Wallace Building.