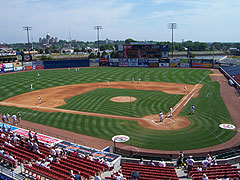 The state high school baseball tournament opens in Des Moines Friday afternoon with the quarterfinal round in class 2A. The opener features top ranked Cherokee against Bondurant-Farrar. Cherokee enters the tournament top ranked and 28-2 on the season and coach Scott Koch’s team has lived up to pre-season exectations.

Koch says the team has kept its calm throughout the year when they get behind, because they know they have the ability to come back. The Braves advanced to the state tournament with a victory at number-six Carroll Kuemper in the sub state final round. Koch says they went in knowing they would have to play very well to win and they came through and did what they needed to do.

This is Cherokee’s third straight appearance at the tournament and Koch hopes that experience is a plus. He says they only have two seniors, but they’ve been to Des Moines and have won some big games, and hopefully will respond. Bondurant-Farrar has a record of 16-15.