You are here: Home / News / ISU president to serve on key NCAA panel 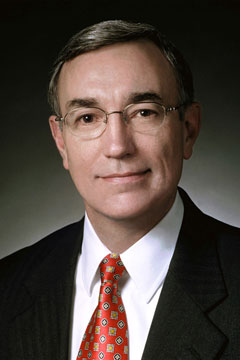 Iowa State University’s president has been appointed to the NCDA’s executive committee.  Gregory Geoffroy will also be the Big 12’s representative on an NCAA panel examining academic standards for the student/athletes on men’s basketball teams.

"Men’s basketball, as a sport, has one of the lowest academic progress rates — it’s called APR — of all the NCAA sports," Geoffroy says.  A number of men’s basketball programs around the country are in jeopardy of failing to meet graduation standards, according to Geoffroy. "This is the NCAA’s attempt to try to figure out what might be done to improve basketball’s performance on this important measure," Geoffroy says.

The group’s recommendations will address Division I programs — the teams which compete to play in the popular NCAA men’s basketball tournament in the spring. "Ultimately, I think what’s important is for coaches to recruit student-athletes who have the potential to succeed academically and then for the universities to ensure there’ sufficient support for them to succeed academically," Geoffroy says.

Geoffroy has just been named one of 16 members of the NCAA’s executive committee as well. Geoffroy describes it as a position of "significant influence."

"Intercollegiate athletics is, of course, a very important part of American culture…It’s a part of many, many universities and colleges around the country. It’s a part of the excitement of living and learning on a university campus and being associated with a university," Geoffroy says. "Intercollegiate athletics provide a great front door to many institutions. It’s how people across the country get to know and perceive universities, in many cases."

Geoffroy says it’s important to ensure that athletic programs are both fiscally and ethically sound and the NCAA is "a complex enterprise" that provides essential oversight, according to Geoffroy.

Geoffroy made his comments during a telephone interview with Radio Iowa.