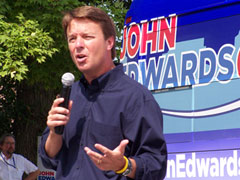 Democratic presidential candidate John Edwards is questioning a top U.S. general who said Friday it "makes sense" to reinstitute a military draft in America."That’s the last thing we should be doing. We do not need a draft," Edwards says. "And on top of that what we should be doing instead of having a draft or even considering a draft is we need to be bringing our men and women home from Iraq."

The draft was ended in 1973. "I assume that the whole reason for considering it is that Bush has worn our military out," Edwards says. "He’s worn out the men and women in the military with the tempo of deployments. He’s worn out our equipment."

Bush Administration officials said this morning there were no plans to revive the draft, despite Friday’s comments from the general in charge of coordinating military efforts in Iraq, who said the draft was an "option on the table."

The big Bush-related news of today is the departure of long-time Bush advisor Karl Rove. Edwards had little to say about Rove’s exit. "Goodbye and good riddance," Edwards said when asked by reporters to comment on Rove’s decision to leave the White House.

Edwards also told reporters it was time for all Democratic candidates to stop taking campaign contributions from congresional lobbyists. "I’ve never taken money from Washington lobbyists for about 10 years that I’ve been in politics and I’m saying all the other candidates should do the same thing, starting now," Edwards said. "I’m not asking ’em to give back anything they’ve gotten, but starting now make very clear that we (Democratic presidential candidates) will not take money from Washington lobbyists."

Democratic candidate Barack Obama, like Edwards, does not accept checks from congressional lobbyists, but Hillary Clinton recently said she accepts checks from those lobbyists because it’s legal under current campaign finance laws and because lobbyists represent real people.

Edwards was an hour and a half late for his bus tour kick-off in Des Moines this morning. "I apologize for being late. Thank you for being so patient. Elizabeth ate something at breakfast this morning that didn’t agree with her. She’s doing fine. She’s doing fine. She’ll be back with us in a little bit," Edwards told a crowd of about 150 supporters who’d gathered in the parking lot of Edwards’ campaign headquarters in Des Moines.

Afterwards, Edwards told a group of reporters his wife’s sickness this morning had nothing to do with her cancer treatments. "I don’t think it has any connection to it," Edwards said. "She just came back from a 10-day, very extensive trip and she’s doing great."

During a mid-day interview with Radio Iowa, Edwards said he and his wife have decided to be "open and transparent" about her cancer and her health.

"We just tell the truth about it and, you know, she’s going through her treatment. She seems to be responding well to the treatment, but it’s one of those things that you have to monitor closely and we’re doing that," Edwards said. "The odd thing is the treatment itself has had no side effects at all. She feels perfectly good."

Mrs. Edwards boarded the campaign bus shortly before noon, enroute to an early afternoon campaign stop in Perry. Edwards plans to visit 34 Iowa cities this week in a campaign blitz planned in advance of Sunday’s debate in Des Moines featuring all the Democratic presidential candidates.