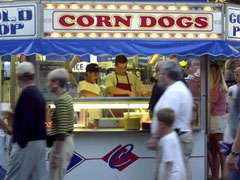 Extreme heat and heavy rain cut into the number of people who went to the Iowa State Fair this year. Marketing Director Lori Chappell says the estimated attendance for the 11-day fair is just over one million, three thousand.

Chappell says attendance was down by about 10,000 people compared to 2006, “but (the numbers) are right in line with where we’ve been for the past several years and we’re very excited about it after five days of rain and high heat indexes.” This marks the sixth straight year that attendance topped one million. Chappell says the new attractions were popular, including the new animal learning center.

“The foot traffic in that facility was always extraordinary,” Chappell says, “and the comments we received were terrific.” Some Iowans enjoy the fair so much, they’ve requested it be extended beyond 11 days.

“It would be easier if school start dates weren’t so early,” Chappell says of increasing the length of the fair. “It would probably be a challenge for us to move forward and extend the fair.” Chappell says plans are already underway for 2008.The theme for next year’s fair, scheduled for August 7th through the 17th, is “U Gotta Love It.”