You are here: Home / Business / State updates job website to help with projected surplus of work 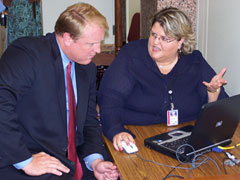 Two state agencies are joining with a group of Iowa businesses to expand the state website that features job openings.

Iowa Workforce Development (IWD) director, Elisabeth Buck, says they partnership will create a "new and improved" website. Buck says it’s a "one stop shop" for employers to post their openings, and for job seekers to connect with all the available opportunities by surfing to: Iowajobs.org .   (Photo: Iowa Governor Chet Culver views the new website with Chris Milles of Iowa Workforce Development)

Buck says the website has added a new technology called "job scraping."Buck says it’s an automated process that lets businesses post their opening and they appear on the state site. The technology is designed to quickly post the new jobs and keep the job list up to date. Iowa Department of Economic Development director, Mike Tramontina, says there’s going to be a big need for the site. He says as the baby boomer generation retires, they estimate there’ll be a surplus of 150,000 jobs.

Tramontina says if they’re going to make up the workforce shortage, they really have to recruit. He says Iowa Workforce Development hasn’t been set up to recruit outside the state. Sue Cheek represents the consortium, and works in the human resources department at MidAmerican. "There’s a challenge for talent, there are open positions that we are seeking to fill," Cheek says. She says any outlet that can help them tap into to bring that talent into Iowa is something they want to do.

Cheek says the website won’t replace other methods of finding workers — it will supplement them. Cheek says they’re are having trouble finding good workers, so anything they can do to connect with works and bring them here is something they want to support and recommend. State officials are asking all businesses to join the website to help find workers.