You are here: Home / Agriculture / Iowa farmers look to elk to diversify 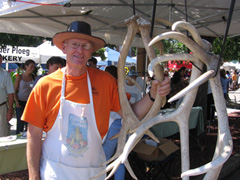 A growing number of Iowa farmers, looking to diversify their operations, are turning to elk. The Iowa Elk Breeder’s Association , which formed in 1993, has grown to around 60 members.

"The major income on elk would be the velvet," Reitsma says, "which are the horns in the early stages of growth." He says prices for the velvet have been rising. Reitsma, along with his wife Carmen and son Justin, have 63 head of elk.

"Elk can grow to be 1,500 pounds," Reitsma says, "a good male buck can get that large. And when you see a full grown male with a full set of antlers, it can just be an awesome sight to see." The Reitsmas also sell elk meat at stores located in Grinnell and Des Moines, and on Saturday mornings at the farmers market in downtown Des Moines. Elk meat is high in protein, but low in fat and cholesterol, compared to beef and pork.