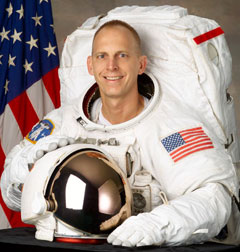 The first Iowa State University graduate in space says he’s loving his latest assignment — aboard the International Space Station. Astronaut Clayton Anderson spoke via satellite on Wednesday to students in his hometown of Ashland, Nebraska.

Their questions ranged from how he sleeps — standing up — to how he stays in shape — lifting weights and using a treadmill and stationary bike. A fifth-grader wanted to know about Anderson’s favorite food.

Anderson says, "My favorite thing to eat is dessert, and my special favorite dessert is chocolate pudding cake. Whenever that comes into the menu I try to gobble up one of those when I can." Anderson’s been aboard the orbiting stations since June. When a sixth-grader asked him about watching the sunrise, Anderson said the station orbits the Earth every 90 minutes.

Anderson says, "So we see a sunrise 16 times every day and the colors are awesome. They’re deep dark blues and purples and bright oranges, yellows and reds. It’s very gorgeous." Other students asked Anderson about staying entertained — he reads, watches TV and practices guitar and piano. A fifth-grader wondered what he’d do as soon as he gets back.

Anderson says, "Right after hugging my wife and giving her a kiss and hugging my two kids, I want to have a Nebraska corn-fed T-bone steak with a baked potato." Another student asked what experiments Anderson’s working on that might have an impact back in the Midwest.

Anderson says, "Right now, I’m growing lots of plants. I’m growing lettuce, I’m growing basil seeds, and some today that I don’t even know what they are. And I’m hoping with all the agriculture in Nebraska, those people will help to figure out great ways to grow plants on the way to Mars."

Anderson got his master of science degree in aerospace engineering at Iowa State in 1983. He lives in Houston, Texas, is married and has two kids. Anderson is set to return to Earth on the next shuttle Discovery mission, which NASA plans to launch October 23rd.