You are here: Home / Politics / Govt / Clintons focus on message of change 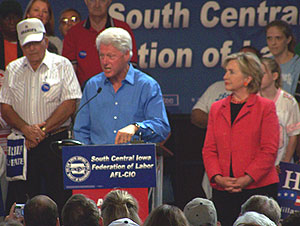 During an appearance on the Iowa State Fairgrounds, former President Bill Clinton spoke first — for about 10 minutes — and just as he did over the 4th of July when the Clintons campaigned in Iowa, he refrained from attacking his wife’s rivals for the Democratic Party’s presidential nomination.

"I like seeing what they have to say. I like having people who are serious, working hard to earn your support, trying to change America," the former president said.

Bill Clinton saved his criticism for the current president and Bush’s economic record, then Clinton cited statistics from his own era. "The last six years I was president, median wages rose for the first time. Family income reached an all-time high," Clinton said. "The number of people without health insurance went down."

Senator Clinton then delivered a recently-retooled campaign speech which briefly stressed her work for the Children’s Defense Fund, her work while she was First Lady of Arkansas, her husband’s record as president and her work as a New York senator. But Senator Clinton focused primarily on a message of change and a focus on the future.

"We want to send out a message near and far, across the state of Iowa, that we’re going to do whatever it takes to change the direction of this country and put it back on the right track," Clinton said.

The International Association of Machinsts and Aerospace Workers endorsed Clinton late last week, and she thanked members of that union who were in the crowd in Des Moines.

As Democrat rival John Edwards had about two hours before in the same meeting hall, Clinton also credited unions with building a middle class in America. "Unions gave dignity and respect and decent wages and working conditions to millions of Americans and we need to make sure that you have the right to organize and bargain collectively in the 21st century," Clinton said.

That is part of a "change in direction" that Clinton outlined.

The crowd, about twice as large as the group that stood to listen to Edwards speak, cheered after each of those questions. Clinton then concluded with her campaign theme.

"If you’re ready for change, I am ready to lead because I have big goals for America," she said.