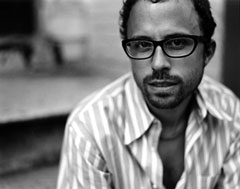 Other singers have had big hits with his songs and now a New York songwriter is singing his own tunes on his first-ever Iowa tour. The song "Don’t Know Why" helped propel Norah Jones to stardom in 2002 and landed songwriter Jesse Harris a Grammy.

Harris has just released his seventh album called "Feel" and is on a national tour, driving himself and his percussionist to perform his songs, his way. Harris says, "I’ll just be playing acoustic guitar and the banjo. I have this six-string banjo that I play which I’ve sort of fallen in love with." The 37-year-old New York City native says his music is hard to pigeon-hole into any specific genre.

Harris says: "I would describe it as something between folk and rock and jazz and pop, something in there, although this album has some Brazilian influence in the percussive element of it. It’s sort of a mixture of things." Harris has also just released the soundtrack to the movie "The Hottest State," featuring his songs sung by several top singers, from Willie Nelson and Emmylou Harris to Norah Jones. Harris is playing shows over the next week in Burlington, Des Moines, Ames and Cedar Rapids.