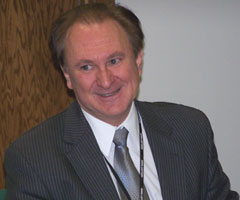 The man who has led the Iowa Lottery since it began in 1985 will soon be able to actually buy a lottery ticket. Lottery C-E-O Ed Stanek broke the news to the Iowa Lottery Board during their meeting today  in Des Moines.

Stanek announced he intends to retire October 31st, and says one of the main reasons is the quality of the staff at the lottery, "I’m not sure there’s anything I can do to bring them up any higher,"Stanek says.

Stanek says another reason for retiring is to spend some more time with his family. Stanek says his mother lives in the middle of Wisconsin and will be 90 in February and has three sisters which all live near her. Stanek says he’s had to help his mother with various affairs since his dad died one year ago in April. Stanek says being retired will allow him to spend more time helping his mother, and will also give him some time for the rest of his family after holding down a job that forced him to be on call all the time.

Stanek’s retirement will end a 35-year government career that saw him serve under four governors. He says there are several accomplishments he’s proud of. Stanek says,"Powerball is one big accomplishment…the environmental days in my early career, and working to establish the first air quality standards and cleaning up the air and doing all kinds of things for environmental programs. I was with governor Ray, and then the energy crisis related things that I did under his administration as well when I was head of the energy department."

Stanek built the Iowa Lottery from the ground up, and says it’s much different now. Stanek says when they started there was just one game, and you sold the game until you ran out of tickets and then started another game. Now he says things are much more sophisticated business today with computers and complicated statistics, "the statistics behind Powerball are not trivial, you might call it extreme statistics." The rise and fall of the TouchPlay machines is a recent controversy Stanek had to deal with as the head of the lottery. He was asked his thoughts on issue.

Stanek says:"We were asked to do something. Worked really hard to get it done. Made it work really well for the state — and then we were asked to dismantle it. Certainly dismantling something you’ve built is never fun. But you do what you’re asked to do." Stanek says the Iowa Lottery has raised more than one billion dollars for state programs in his tenure and he will step down as the longest serving lottery director in the world.