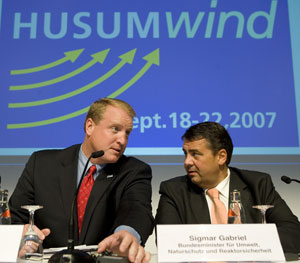 "I hope to make a major announcement or two in the near future related to this trip," Culver told reporters this morning during a telephone conference call.

One of those announcements is likely connected to T-P-I Composites, a company that has plans in the works to open a facility in Newton. Culver is mum on details about that other announcement, but he is touting the job creation that may come from it as well as other expansions.

"It is fair to say that we are talking about hundreds if not thousands of new jobs in the next couple of years just related to wind energy," Culver says. Culver has been making the case to Europeans that Iowa not only sits near the geographic center of the country, making it a transportation hub, but Iowa also sits on a major wind ridge in the U.S.

"Arguably Iowa has more opportunities related to renewable energy than any state in the nation and so we’re here rolling up our sleeves and working hard to tap that potential," Culver says. There are about eight-hundred different parts that go into a wind turbine and Culver says his effort is shifting to get the companies that make those parts to open facilities in Iowa.

"The first challenge was to get the turbine and the blade manufacturers to our state…but the next phase will clearly be on the gear boxes, for example, that power the turbine," Culver says. "There is a concern about not having enough of those components and (it’s) the same with bearings and a couple of other key components." Culver’s visiting Germany, Denmark and Spain this week. At the end of his tour, Culver will have visited with 18 different companies that either build wind turbines or make the components for wind turbines.

Monday in Denmark, Culver visited Seimens, which is operating a blade manufacturing plant in Fort Madison. He’ll visit Acciona in Spain tomorrow. That’s the company opening a turbine plant in West Branch. Culver’s also met with a number of the companies that supply Clipper, the company which is opening a blade manufacturing plant in Cedar Rapids. Culver attended a wind energy conference in Germany and was invited to speak at the event which attracted people from 30 different countries.