You are here: Home / Recreation / Entertainment / Improv comedians visit Iowa for one show 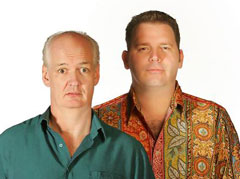 Two men considered among the world’s top improvisational comedians are bringing their unscripted antics to Iowa for one show this week. Best known from the TV show “Whose Line Is It Anyway?”, Colin Mochrie and Brad Sherwood are in their fourth year together on the road in what Mochrie describes as a free-for-all.

He says, “We get suggestions from the audience and make up scenes based on those suggestions and for about 80-percent of the games we have audience members up on stage with us.” And since there’s no script to memorize, Mochrie says their pre-show ritual is simple: “Well, we drink coffee and have some donuts. Sadly, that’s our preparation.”

After all, he says, how else could you truly prepare for such outlandish tasks as demonstrating how to milk a cat or vacuuming the head of Elvis using an earthworm? Mochrie, a 49-year-old Canadian, says it still gives him the willies as showtime approaches, knowing he has nothing at all planned for the evening’s entertainment.

Mochrie says: “It is always a bit of a surprise. As I hear the audience out there, I think, “Yeah, all these people have paid their hard-earned cash to come see a show and Brad and I have no idea what we’re going to do,’ so basically, it’s up to the audience to supply us with great things to make a great show.” In one perennial feature of the show, Mochrie and Sherwood are blindfolded and barefooted while performing an improvised scene — from painting a wall to building a birdhouse — as real mousetraps strewn across the stage are snapping their toes and other body parts.

Mochrie says their big reward is being given new and unusual challenges every night they’re on-stage.

“Brad and I have been doing this show for about four years now and we just can’t get tired of it because it’s different every night,” Mochrie says, “the audience throws new things at us. We’re also trying to come up with different ways of asking for suggestions so we never get the same suggestion twice, so keeping it different every night just makes it so much more fun for us.”

Their only Iowa show is Saturday, September 29th, at the Civic Center of Greater Des Moines. For details, visit “ www.civiccenter.org “.