You are here: Home / Education / Blackboards are a thing of the past in today’s classrooms 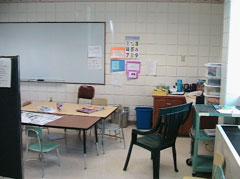 Adult Iowans who don’t have kids might be a little shocked to see what’s in today’s schools — and what’s not. Forget looking for the school library. It’s a "media center" now, void of relics like card catalogs.

Iowa Department of Education director Judy Jeffrey says virtually all chalk and blackboards are gone from the state’s classrooms too in favor of markers and intelligent whiteboards.

Jeffrey says: "We have the whiteboards that are dry-erase. Those are very common now in our schools. We’re also having schools that are moving to a whiteboard concept that has the teachers building in presentations with flip-charts and have links and interactive fun and have handheld devices that actually hook right into those intelligent whiteboards." As for computers, she says some kids arrive in kindergarten keyboard savvy. Jeffrey says: "It’s not quite typing. They don’t have the same kind of fingering style that we did when we learned on our old typewriters, but they definitely know how to use a computer. They know how to search the Web. They know how to send messages."

She says those desks with flip-up wooden tops and built-in chairs are dinosaurs and they’re gone too, for the most part. "Their desks or tables that they sit at can be moved easily for group work or partner work<" Jeffrey says, "we’re trying to create environments that are going to resemble workplaces of tomorrow rather than the straight rows, a teacher in the front, talking to the class." She says Iowa’s schools are changing with the world around them and they’re adapting to the technology.

Jeffrey says, "We were fortunate to be one of the recipients of the Microsoft settlement so those dollars will be flowing to school districts probably early next spring and with those dollars we hope to encourage school districts to seek even more innovative ways to use technology to improve learning for our students." Some kids are much more tech-savvy than their teachers, as Jeffrey says the children are natives to technology; teachers are immigrants.