You are here: Home / Outdoors / Bobcat population continues to grow in Iowa 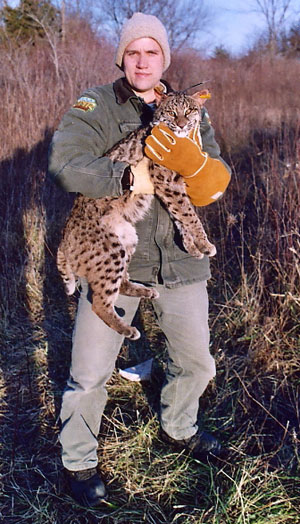 The bobcat population in Iowa keeps on growing and the Department of Natural Resources wants to keep it that way. The DNR’s Todd Gosselink is leading a study of bobcats in Iowa. He says their population is growing at a rate of nearly 12-percent a year. He says bobcat numbers are increasing across the midwest.

Gosselink estimates there are up to 5,000 bobcats in Iowa right now, mostly in counties south of Highway 34. He says bobcats weigh roughly 18 to 26 pounds and don’t pose much of a threat to humans. About 60-percent of a bobcat’s diet is rabbits.

"They definitely will knock down the rabbit numbers," Gosselink says, "squirrels and mice are the next most common." Gosselink says the bobcat can play a vital role in Iowa, by controlling the rodent population. Gosselink is entering the final year of a five year study that covers Decatur, Wayne, Appanoose, Clarke, Lucas, Monroe, Warren, and Marion counties.

Trappers in the area are asked to call a 24-hour bobcat hotline if they catch one of the animals. That number is 641-203-2218. Gosselink says trappers should leave the animal alone, and someone with the DNR will immediately come to the area to mark and release the bobcat. The DNR is working with researchers at Iowa State University on the bobcat study.