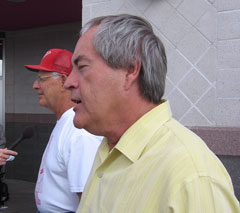 Around 600 people attended the Iowa premiere of “The Final Season” in Cedar Rapids Sunday. The invitation only event included local cast and crew, investors, and a few of the movie’s stars.

The film, which tells the story of the 1991 Norway, Iowa baseball team, opens in theaters nationwide this Friday. Ottumwa, Iowa native Tom Arnold is in the film, and attended Sunday’s premiere.

“The reason I did the movie is because I wanted to make sure that Iowa looked right, and we didn’t look like a bunch of hicks,” Arnold said, “and it’s fun to bring 100 people from California here and show them all the food and the fun stuff to do. So, it was nice and (the movie) turned out real well.” Powers Boothe was also in attendance. He portrayed legendary Norway baseball coach Jim Van Scoyoc, who was forced out of the job for the ’91 season.  (Photo L to R: Jim Van Scoyoc and Powers Boothe)

Van Scoyoc says he’s thrilled with how the movie turned out. “I think Powers did a pretty dog gone good job,” Van Scoyoc said. “He’s an impressive man. I never met him until the first night that they were filming, and I was a little skeptical, but after we talked for about an hour and 15 minutes, I was like ‘whoa, this dude’s alright’…and he knows baseball too.”

Kent Stock coached the 1991 Norway team in it’s final season, before the school merged with Benton Community. He says the movie is mostly based on fact. “It’s pretty close,” Stock said, “there were a lot of things they took liberties with, but they do that with all movies. I was able to read every script, and everything that came across was okay with me.”

Governor Culver and First Lady Mari Culver also attended the premiere. Culver says he hopes more movies will be filmed in the state, following legislation approved this year offering tax incentives to film-makers who choose to shoot in Iowa.