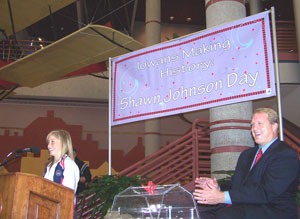 A 15 year old girl from central Iowa, who won three gold medals last month at the World Gymnastics Championships, was honored with a ceremony in Des Moines Wednesday.

"This is the biggest honor ever…to have you’re own day? That’s kinda crazy," Johnson said before a crowd gathered at the State Historical Building. Johnson was named the all-around champion at the World Championships in Germany, and is considered the favorite to take the gold in the 2008 Olympics. 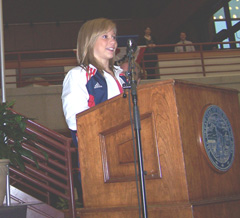 "This year has been the best year ever," Johnson said, "very hectic and very hard, but I can’t wait for next year."

The four foot, nine inch tall Johnson wore a red, white, and blue warm-up suit, and stood on a platform, so the crowd could see her above the podium.

"I loved Germany," Johnson said, "but I’m willing to put in a hundred times more effort next year and hopefully come back with a gold medal."

Johnson said she is proud to call Iowa "home." "Iowa is the best state ever," Johnson said to the crowd, "I could have never gotten here without you." Johnson is a sophmore honor student at West Des Moines Valley High School. The 2008 Olympics will be held in Beijing.