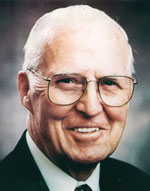 The annual World Food Prize celebration is in full swing in Des Moines. The events on Tuesday included a panel discussion with representatives from nine presidential campaigns. Former Iowa Governor Terry Branstad hosted the discussion on behalf of "One Vote ’08",  bipartisan movement against poverty.

"When you have people that are starving and suffering," Branstad said, "they are obviously the people that can be affected by demagogues – who can use that suffering as a way to motivate them to do damage to other people. If we can be leaders in providing assistance in a sustainable way, I think it improves our national security and our safety and well-being as well."

Branstad says every candidate should be talking about their plan to combat poverty on the campaign trail. One of the World Food Prize events getting started today (Wednesday) is the "Borlaug Dialogue," which will focus on renewable fuels. Food Prize Ambassador Kenneth Quinn says there are legitimate concerns about food versus fuel. But he says that’s not the only side of the issue.

Quinn says Africa, for example, could potentially become the "new Saudi Arabia" if corn could be grown there and turned into fuel. Cresco, Iowa native Norman Borlaug established the World Food Prize award in 1986 to honor men and women who make a vital contribution to the world’s food supply. Twenty-one years later,

Borlaug says hunger is still an issue that needs to be addressed. "(Hunger) is one of the destabalizing factors around the world," the 93 year old Borlaug said Tuesday. "Destabalizing from a standpoint of social, economic, and political."

Borlaug won the Nobel Peace Prize in 1970 for his work to develop disease resistant wheat and transform agricultural production in developing nations. He is known as the "father of the green revolution" and just this summer was awarded the nation’s highest honor for a civilian – the congressional gold medal.