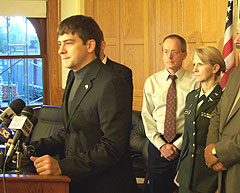 Democrats in the Iowa Legislature say they will introduce a bill during the next session that will offer new job security measures for soldiers returning to Iowa from active duty.

Representative Kevin McCarthy, the Democratic leader in the House, says he’s heard cases of national guard and reserve members, that have returned from Iraq or Afghanistan, and their employer has refused to give their job back.

McCarthy says the practice is prohibited by federal law, but filing a lawsuit is difficult and can take up to two years for a decision. "We’re going to have a process in place here in Iowa that mirrors the federal law, but put some more teeth in it with regard to protection of our soldiers and the jobs that they left behind when they went overseas," McCarthy said at a statehouse news conference Thursday.

Representative McKinley Bailey, who’s from Webster City, says the guard and reserve job security initiative is based on a similar law in Nebraska. "Right now, in the federal law, there are no criminal penalties for violating it," Bailey said, "so we will make it criminal to do so here in Iowa."

Pam Reynolds of Ames also spoke at Thursday’s press conference. She’s a Captain in the U.S. Army Reserve and returned to Iowa in March of 2006, after 15 months of active duty at Fort Hood, Texas. Reynolds says she expected to return to her civilian job as a physical therapist at an Ames retirement community, but was told she needed to reapply for her position. She was eventually offered the job, but at lower pay.

Reynolds says she hopes her story will encourage others like her to report their employer to the state. "Many (soldiers) come back as single parents," Reynolds said, "they take a lower cut in pay or they have to move. Their lives have been turned upside down. They don’t need this." Bailey, who served in 120 combat missions in Iraq and Afghanistan, admits there are not many companies in Iowa violating the federal law.

"The vast majority of our Iowa businesses are following up on this, they’re doing everything right," Bailey stated. "It’s the handful of bad actors who were going to let know today that we’re serious about this and were not going to let them get away with it." McCarthy says the bill will be introduced on the first day of the 2008 legislative session.