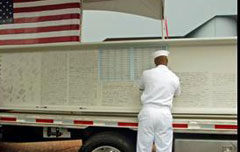 An exhibit on the September 11th attacks will be in Iowa next week featuring metal beams that’ll be part of a memorial.

The tribute is visiting 25 cities in 25 states and contains two long, white I-beams that will be included in the National Nine-Eleven Memorial and Museum under construction in New York City.

Project president Joe Daniels wants Iowans to autograph the beams, saying: "We’re asking thousands of people to come out, sign their name, leave a small message of support and really join this effort." Daniels says the exhibit includes a photo gallery about the terrorist attacks in New York, Washington D.C. and Pennsylvania.

"I think importantly, these images show how this country came together in an unprecedented way after the attacks," Daniels says, "finally, we have a video which has first-hand accounts from those that were in the buildings, those who rushed in to save others, family members who lost loved ones. It really takes you back to that day and back to our response as a country."

Des Moines Assistant Fire Chief Jim Mason says the exhibit "is a very emotional tribute. It’s gone around to several different cities and Des Moines is very fortunate to have it." Mason says many firefighters, law officers and members of the military are expected to visit Des Moines to see the exhibit and sign their names.

Mason says: "It’s a very quiet time. It’s kind of like when you go to Washington D.C. and see the Vietnam Memorial or the World War Two Memorial. People just have a real hushed and reverent attitude when they’re there and get to look at the pictures from Nine-Eleven. We’re all very familiar with it but we get to look at those and really feel a part of it by signing this beam."

The exhibit will be in Des Moines next Tuesday (Oct. 23) outside the Capitol Building at Finkbine Street from 10 AM until 6 P.M. It will also be in Omaha on October 27-28 at the Lewis and Clark Landing on Riverfront Drive from 10 AM to 6 P.M. both days. The memorial itself is scheduled to open at Ground Zero in New York in late 2009, with the museum slated to open in 2010.