A traveling exhibit from the National September 11th Memorial & Museum was opened to the public today at the Iowa capitol building.

Former New York Governor George Pataki, state and local leaders were joined by a group of school children for a ceremony to open the exhibit. The ceremony was sometimes somber — but also filled with hope about the future.

Pataki says the new museum will tell about the nearly 3,000 people who lost their lives on September 11th. And he says it will tell about another part of the story. He says it will tell about the courage, strength and unity with which New Yorkers and Americans responded that kept our country together and sent a clear message to the terrorists “that they had failed that they had not broken the spirit of New York, they had not broken the spirit of America, and that we are more confident and proud of our freedom today than we were on the morning of September 10th of 2001.” 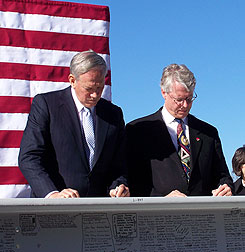 Part of the exhibit includes a couple of steel beams. These beams will actually be a part of the memorial that is being constructed at ground zero,” Pataki says.  He says thousands of people across the country are signing the beams,”Because just as you were there in the weeks after September 11th, you will be there in the decades and generations to come, as showing this was not just a New York response, it was an American response.”  (Photo: Pataki and Des Moines Mayor Frank Cownie sign the beam)

Former New York firefighter Lee Ielpi was also at the ceremony. Ielpi’s son Jonathan was a firefighter inside the twin towers when they collapsed. Ielpi says they found his son’s body exactly three months after September 11th, and he and his other son Brendon went to ground zero and recovered the body.

Ielpi says they went to the basket containing his son’s body and paid their respects, and then in the tradition of the fire department, they were able to carry out his body. Ielpi says he was lucky as few of the families of the 300 some firefighters who died were able to recover a whole body. He says he was fortunate that his mission of recovering his son’s body was accomplished, but Ielpi says many fathers still have not to this day accomplished the mission.

Ielpi says the memorial shows the damage done on September 11th didn’t last. Ielpi says, “The did hurt a lot of people, but our country stood strong, our country will always stand strong.” He says the memorial is a signal to the terrorists that you can test our freedoms, but they will never win our freedoms, they are in our hearts. Ielpi says freedom didn’t come easy, it didn’t come cheap, and it still doesn’t come cheap today.

The exhibit will be open on the west side of the state capitol today until six o’clock today.