You are here: Home / News / Des Moines fire said not to be as bad as it looked 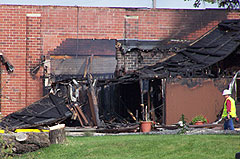 The fire at a chemical plant in Des Moines Monday was visually spectacular, but caused relatively little damage and no one was seriously injured.

The explosive blaze, which shot 50 gallon drums hundreds of feet in the air, has made national news headlines.

David Casten is president of Barton Solvents says, "I don’t want to downplay things, but I think the visual effects of this fire are much more than the actual damage caused." Barton Solvents is headquartered in Des Moines, with other several other plants in the midwest. Casten says it’s not known yet exactly how the fire started.

"We’d like to know what happened," Casten said. "We have some other locations we’d like to safeguard as well. I’m very eager to know." The Des Moines blaze follows a similar fire at a Barton plant near Wichita, Kansas in July. Casten spoke at a news conference outside Barton’s entrance on Des Moines’ northeast side, and then offered a limited tour of the buildings affected by Monday’s fire. He says a warehouse, a drum filling area, and the main offices were all destroyed – but it’s "too early to count dollars."

About a dozen Barton employees evacuated the scene when fire alarms sounded around 1 PM Monday. Casten says the fire started as two workers were moving some chemical drums. "Something ignited and flashed in front of them," Casten said, "they grabbed a fire extinguisher and fought the flames. They did a pretty good job with that until the fire extinguisher ran empty and then it got away from them."

Casten says it’s unlikely another fire extinguisher would have made much of a difference. He says there may have been two or three extinguishers in the area, but the workers were confined by the fire and only had access to the one unit. The fire was still smoldering Tuesday afternoon as federal investigators arrived on the scene.